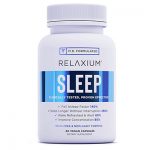 This is our Relaxium Sleep reviews.

What is Relaxium Sleep?

This is our Relaxium Sleep review – an all natural sleep aid and anxiety supplement from Relaxium, which is claimed to be MD formulated.

But how well will it work for you?

In this review, we look closer at Relaxium to see how effective it really is.

This is what you need to know…

Below are the full Relaxium ingredients:

One of the main drawbacks with the ingredients in Relaxium is the proprietary blend Valerest.

It makes it unclear how much Valerian and Hops there actually is in this supplement.

Below, we look closer at the ingredients in Relaxium to see how effective it really is.

L-tryptophan is an amino acid found in protein-rich foods such as poultry, meat, and dairy. It also contributes to the creation of serotonin which is a neurotransmitter that regulates mood, appetite, and sleep cycles.

Consuming L-tryptophan can help regulate your mood and improve the quality of your sleep. It can also be taken as a supplement to help ease symptoms of anxiety.

Tryptophan supports the production of serotonin, which helps regulate mood and sleep.

An intake of L-tryptophan also boosts your immune system and helps you maintain your weight.

Valerian is a sleep aid that is reported to have various benefits.

Valerian has been used for over 2,000 years as a sleep aid and for easing anxiety. It is also sometimes used to treat chronic pain and diarrhea.

The FDA does not approve valerian for any medical use and reports of valerian’s effectiveness are mixed.

Some people find Valerian helps them fall asleep more quickly and stay asleep longer, while others say it had no effect on them at all.

Hops are a bitter, resinous flower with high levels of humulone and lupulone that is used in the brewing of beer. In herbal supplements, hops are often used to stimulate appetite and digestion.

What do hops do in supplements? They can be an appetite stimulant and digestive aid.

Hops also have been shown to help with sleep disorders, anxiety, and depression. They may reduce insomnia and other sleep disorders by reducing the time it takes for a person to fall asleep at night. Some research suggests that hops may help people feel less anxious or depressed by increasing serotonin levels or providing natural sedative properties.

Ashwagandha is an herbal plant that has been used for centuries in Ayurveda, the traditional Indian system of medicine.

Ashwagandha is a type of plant that grows in the mountains of India. It’s been used for centuries in Ayurveda – the traditional Indian system of medicine. There are many different types of ashwagandha, but the most popular one is this long thin root with a brown outer layer and a white inside layer. In Ayurveda, it’s believed to be an “adaptogen,” which means it helps to restore balance to your body no matter what kind of stress you’re under – whether it’s physical or mental stress.

GABA is an inhibitory neurotransmitter that has an effect on mood, sleep, memory, learning and muscle function.

The brain relies on GABA to maintain a healthy level of excitement and prevent the brain from being overstimulated. This is why GABA is responsible for balancing out excitatory glutamate.

The molecule was first discovered by scientists at Stanford University in the early 1950’s who were searching for a compound that blocks the action of another neurotransmitter called acetylcholine. The neurotransmitter was named after gamma-aminobutyric acid because it was found to have a similar chemical structure to other amino acids such as tryptophan and valine.

Chamomile is a plant that is most commonly used in herbal teas. It has been used for centuries to help people sleep and calm down.

It contains several terpenes that can act as anti-inflammatory agents, which allow it to relieve pain and swelling when applied topically. Chamomile also contains a compound called apigenin, which helps the body produce more of the hormone progesterone which can reduce stress and anxiety.

There are many natural benefits of chamomile. It has been used for centuries to help people sleep better and also as a remedy for headaches, stomach aches, and more. The plant itself is herbaceous and parts of the flowers are used in herbal teas or medicinal remedies.

Passionflower is a natural herb that is often used as a sleep aid.

Passionflower has been used for centuries as a herbal remedy for insomnia, seizures, and anxiety. It’s most well-known use is in the form of a tea to help people who have trouble sleeping. It’s also believed to have sedative effects on the central nervous system when drunk in large amounts.

Passionflower is often used as an herbal supplement because it contains flavonoids which are thought to be effective natural remedies against inflammation and oxidative stress. It’s also said to help with anxiety and other mental health concerns like depression, but there isn’t any conclusive evidence of these claims yet.

Passionflower extract can be found in various forms: in food, drinks, tablets or capsules.

Melatonin is a hormone secreted from the pineal gland in the brain, which helps regulate your sleep-wake cycle.

Melatonin is a hormone that regulates your sleep-wake cycle and is secreted by the pineal gland in the brain. It is important for maintaining a healthy sleep schedule, and there are numerous ways in which it can help you get enough quality sleep every night.

Melatonin can be taken to help with jet lag, shift work or sleep issues. There are also medical conditions where melatonin supplements may be helpful, such as major depressive disorders, autism spectrum disorder, schizophrenia and end-of-life care.

It’s important to note that while melatonin supplements are considered safe for most people, they can have unhealthy side effects for certain people so talk to your doctor before taking them if you have any concerns. 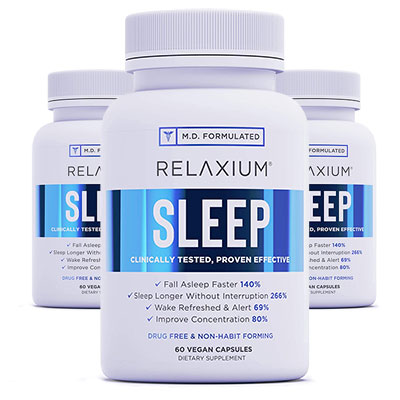 What is the active ingredient in Relaxium Sleep?

The active ingredients in Relaxium Sleep are as follows:

As we’ve mentioned, these are just the ingredients that are on the label of Relaxium Sleep. We’ll go into more detail of the dosages of them are below.

Below, is the full list of Relaxium’s active ingredients:

What are the side effects of Relaxium?

Relaxium has potential side effects from two ingredients in it: GABA and Melatonin.

GABA has been seen in some cases to cause sleepiness, muscle weakness, upset stomach, headache and more.

The melatonin on the other hand is not natural melatonin – its synthetic. The issue with this is that your body may cause drowsiness, dizziness and nausea – which is not ideal when you’re looking to relax and sleep.

Potential side effects for Relaxium Sleep could be:

Which are are potential side effects from the GABA and Melatonin which is already in this supplement.

Relaxium like every brand, has it fair share of complaints. Here are just a few of the one star reviews that have been left for Relaxium on their Amazon page:

If you can’t see the image, here’s that again in text:

“I awaken multiple times throughout the night and have difficulty getting back to sleep. I bought this product because it was supposedly developed by a neurologist, so I thought there might be some science behind it. I took 2 capsules the first night, and they had no effect on my sleep. Directions state that one can increase the dose to 4 capsules if needed, so on my second night I took 3 capsules. Still no effect. Next night, 4 capsules, same result. A complete waste of money.”

“IT DOESN’T work for me THE LAST TWO NIGHTS I HAVE TAKEN ABOUT 6 PILLS WITH A. GLASS Of WATER. I DIDN’T SLEEP AT ALL.”

“Total rip off. I don’t know what’s in this crap…but it isn’t any kind of sleep aid.Buying this is like flushing your money down the toilet.”

As you can see, there are numerous complaints about Relaxium.

Relaxium Sleep is not the most effective stress supplement on the market. Although it does contain some good ingredients, some potential side effects and the use of proprietary blends hold it back.